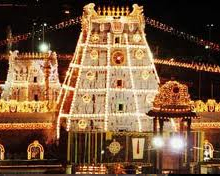 The Tirumalai Hill comprises seven peaks which are known as Seshadri, Neeladri, Garudadri, Anjanadri, Vrishabhadri, Narayanadri and Venkatadri. These seven peaks are collectively called Seshachalam as they represent the seven hoods of Adisesha, the serpent on which Lord Vishnu reposes regally in his heavenly abode known as Vaikuntha. 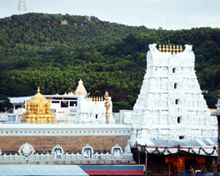 On a normal day, a pilgrim has to queue for 4 to 5 hours to have the darshan of the diamond- decorated black idol of Lord Venkateswara, also referred to as Lord of the Seven Hills, who presides over the shrine that has been patronized by the ancient south Indian kingdoms including the Pallavas, Cholas, Pandyas and Vijayanagar. The temple which finds mentions in the ancient Hindu scriptures is one of the finest specimens of south Indian temple architecture. Plated with gold both the Vimana and the Dhwajasthambam (temple flag-post) are a feast for the eyes.

Temple activities start from 3 AM in the morning and continue until 12:45 PM in the night. Hailed as the richest temple in the world, it remains closed on Sundays.

In close proximity to the Venkateswara Temple is located the holy tank of Swami Pushkarini a dip in which is considered an auspicious ritual before entering the temple. The legend has it that Swami Pushkarini, a pleasure reservoir of Lord Vishnu in his heavenly abode, was brought to earth by his mount Garuda, the divine eagle, for the sport of Lord Venkateswara. 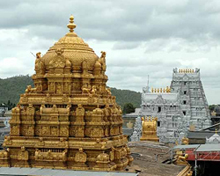 The large shrine of Padmavati Temple is located in Tiruchanur, about 3 km south of Tirupati. Dedicated to the goddess Padmavati, the consort of Lord Venkateswara, the shrine is also known as 'Alamelumangapuram'. A visit to Tirumalai is incomplete if you don’t visit the Sri Padmavati Devi shrine.

Another important shrine which must be visited in your pilgrimage to Tirupati is the Govindaraja Swami Temple said to have been consecrated by the 11th century Dravadian theologian Ramanujacharya. Constructed by the Nayakas, the feudatories of the mighty Hindu kingdom of Vijayanagar, the shrine boasts an impressive outer gopuram, a tower over the gate of the temple. Here you will find Sri Venkatesvara Museum which is a repository of temple arts.

In Tirupati Sri Kapileswaraswami shrine is the only temple dedicated to Lord Shiva. Located adjacent to the shrine is the holy waterfall of Kapila Teertham, also known as Alwar Teertham, which attracts visitors. Another famous shrine is Kodandaramaswami Temple which is located n the middle of the town, Constructed by a Chola ruler in the 10th century AD, the shrine is presided over by Rama, Sita and Lakshmana. 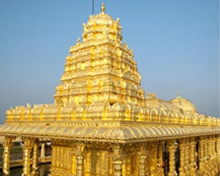 If you are a wildlife enthusiast, Sri Sri Venkateswara Sanctuary & National Park, spread over an area of 506 sq. km, at Tirupati is a place to be.

The nearby places which can be visited while you are in Tirupati are Chandragiri Palaces and Fort, Talakona, Kailasanathakona, Papa Vinasanam Dam, Srikalahasti and Horsley Hills. 21 km from Tirupati, Chandragiri once served as the capital of the mighty Hindu empire of Vijayanagar. Nestled in the dense forests, the 60-metre waterfall at Talakona attracts visitors who come here to marvel at the spectacular landscape. Its waters are said to have medicinal properties. Located 5 km north of Tirupati, Papa Vinasanam Dam teems with fish and provides a beautiful setting. Situated at an altitude of 1,265m above the sea level, Horsley Hills is a famed hill resort known for its salubrious climate. It is 140 km away from Tirupati.