According to Hindu mythology, Kumbh Mela is held in the four holy places where a drop of the nectar of immortality, while being carried by the mythical bird Garuda, fell. Haridwar, Allahabad and Ujjain are the other three places which play host to the Kumbh Mela. 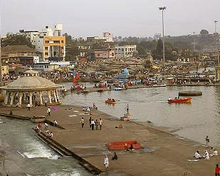 Nashik is deeply associated with the episodes from the great epic of the Ramayana. Legend has it that Lord Rama spent in Nashik the major part of his 14-year exile to which he was sent by his father. Known for its temples Nashik brims with several shrines, chief among which is the Kala Rama Temple which was built in 1794 and it is said that the temple is located on the site where Lakshmana, brother of Rama, hacked off the nose of Surpanakha, sister of demon king Ravana. Nearby is located the Panchavati Gumpha, where Sita, consort of Rama, hid herself when Ravana came to abduct her.

A few walks from the Kala Rama shrine is the bathing ghat of Ramkund where, it is said, Rama supposedly used to bathe. Situated on the banks of the Godavari, the Someshwar Temple is another religious highlight of Nashik and dedicated to Lord Shiva. Made of pink marble from Makrana district in Rajasthan, Muktidham temple is visited by the devotees for its depiction of several renowned Hindu pilgrim places of Hindus in India that also include the 12 Jyotirlingas. Located at the western end of Victoria Bridge, Sundar Narayan Temple, though in ruins, enshrines three black idols of Vishnu. 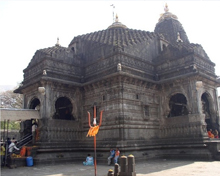 Dedicated to Lord Shiva, the Kapaleshwar Temple is one of the oldest shrines in Nasik and is set in the tranquil environs on the banks of the sacred river Godavari. Jain Mandir Naroshankara Temple, Sundarnarayan Temple, Bhakti Dham, Shree Ved Temple and Navshya Ganpati are the other sacred shrines in Nashik which will provide you the opportunity to soak in spirituality.

Nishik is used as a base to visit the Trimbakeshwar shrine, and Shirdi, the abode of famous mystic Shri Sai Baba, and other interesting places in the district of the same name. Built in the Indo Aryan style, Trimbakeshwar temple, 33 km away from the Nashik city, is one of the 12 Jyotirlingas dedicated to Shiva, The richness of India's spiritualism finds its fullest expression at the shrine on Mondays when the idol of Trimbakeshwar is carried by the priests in a palanquin on their shoulders around the temple. On the auspicious day of Shivratri, the shrine attracts thousands of devotes from different parts of the country. 119 km away from the Nashik city, Shirdi is renowned for its association with the famous Saint Shri Sai Baba whose mortal remains are buried here. 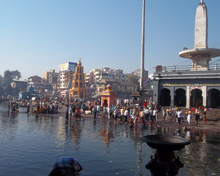 Situated on the Nasik-Trimbakeshwar road, Ajneri captivates pilgrims for being the birthplace of Lord Hanuman. Nestled in the serene landscape blessed with the lush greenery, Ajneri teems with several Jain shrines.

Set against the backdrop of the Sahyadri Mountains, Nashik is today fast emerging as a hub of commercial activities. With your trip to Nashik, you can visit the nearby places that include which make an unforgettable travel to this third most populous city in Maharashtra.